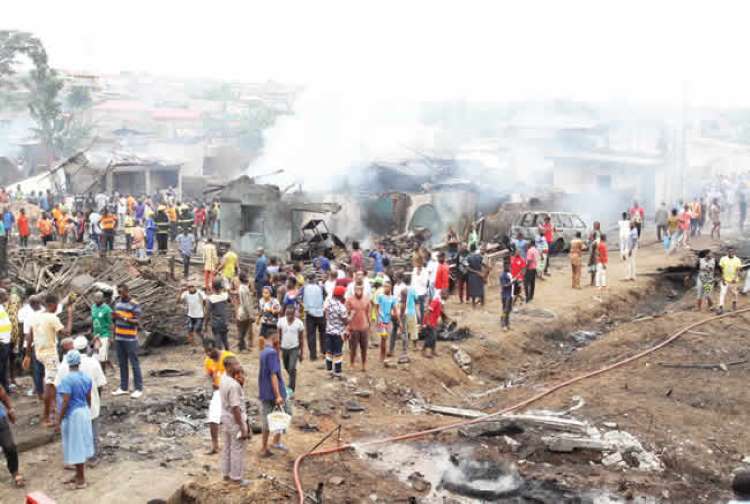 Tragedy struck at Balogun Bus stop, in the Iju-Ishaga area of Lagos State, on Thursday after a tanker transporting gas exploded.

It was learned no less than 30 people were injured, 15 vehicles razed by the fire.

NEWSNAIJA gathered that two gas tankers were being offloaded at a gas station in the area when one of the tankers, a 30 tones LPG tanker, exploded around 3 pm.

It was gathered that the discharging valve of the tanker, which was compromised, led to leakage that led to the explosion.

The fire, which spread was said to have affected 23 buildings and 35 shops, destroying property worth millions of naira.

Nosa Okunbor, The Head of Public Affairs of LASEMA, said no life was lost.

Okunbor,  said, “It was discovered that a 30 tones LPG tanker being operated by Manna Gas Ltd was involved in an explosion which destroyed several vehicles, X and Y Event Centre and a plank market.

“It was later discovered that a compromised seal device by the truck driver led to gradual leakage, which then ignited when the tyres burst. The impact of the explosion led to the fire at adjoining buildings and several vehicles were burnt.

“Thirty people were found to have serious injuries and were taken to various hospitals, while two in critical conditions were referred to the Lagos State University Teaching Hospital, Ikeja.”

Farinloye said, “One of the gas tankers wanted to enter into Manna Gas Refiling Plant and before it could get access inside, it exploded and affected the second gas tanker and other domestic gas cylinders in the gas plant also exploded, the explosion affected 18 buildings, 35 shops no residential building was affected.

He said, “15 people had various degrees of injury and were taken to Iju Waterworks Clinic, while two were referred to the general hospital; 16 vehicles were burnt.”

Margaret Adeseye, The Acting Head of the State Fire Service, said the Ajuwon, Agege, and Alausa Fire stations were mobilized to the scene.