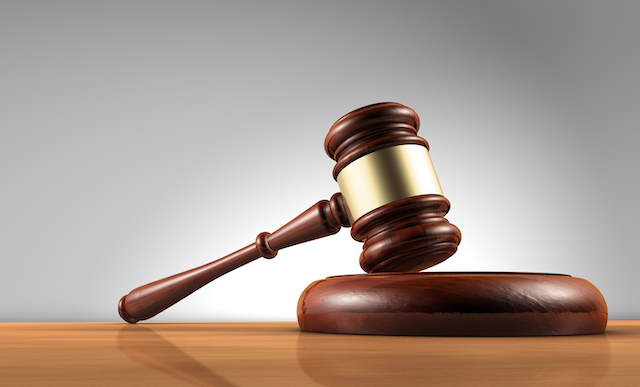 Judge law lawyer and Justice concept with a 3d render of a gavel on a wooden desktop with grey background.

A Lagos State High Court in Ikeja, on Tuesday, acquitted a commercial motorcyclist, Tashiru Ibrahim, of murder after he had been in detention for six years.

Ibrahim was arraigned on one count of murder before Justice Hakeem Oshodi.

A. Adewoye, the prosecutor, had alleged that Ibrahim killed one Sodiq Olayiwola by stabbing him in the leg with a knife during an argument over money on July 12, 2014, around 8.30 pm in Ikeja.

Justice Oshodi delivering his judgment said the prosecution failed to provide enough evidence to prove the offense of murder against Ibrahim.

Justice Oshodi stated that the prosecution called two witnesses, who were the siblings of the deceased.

Oshodi said, “Upon the assessment of the evidence of the prosecution witnesses, it was clear that they were not present at the venue of the alleged stabbing on the day of the incident. None of these witnesses gave evidence as to the particulars of the offense, which is the stabbing of the deceased in the leg.

“The evidence they gave was just a narration of what they were told by other people namely: the deceased’s father, the doctor, and some people at the hospital. The deceased’s father, the doctor, and the people at the hospital did not give evidence in this case. The police, who should have investigated the case, did not give evidence during the trial.

“Having assessed the evidence before it, the court holds and finds that the prosecution has been unable to prove a case of murder. As a consequence, the court finds the defendant, Tashiru Ibrahim, not guilty of the sole count. He is hereby discharged and acquitted. He is to be released from the correctional facility immediately.”