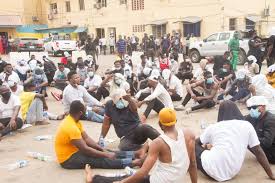 News reaching us says a mobile court sitting at the Lagos State Task Force on Environmental and Special Offences Enforcement Unit in Oshodi has convicted 172 persons arrested by the state police command for violating COVID-19 protocols.

The state police command stated on Monday that the presiding judge ordered each of the 172 violators to pay a fine of N40, 000, and also subjected them to community service.

Hakeem Odumosu,  the state Commissioner of Police while parading them at the command headquarters in Ikeja, said the 172 persons were arrested during a raid on the Cubana Nightclub, Victoria Island, on Saturday.

The CP said, “in spite of all the efforts and COVID-19 policies being rolled out by the government, most youths, who are leaders of tomorrow, still find it difficult to comply. Self-compliance is what matters most; the ladies and gentlemen here were arrested around 2 am on Saturday at the Cubana Nightclub on Victoria Island.

“When we got there, 172 violators were inside one club and were not observing social distancing. We have footage of them in the club and aiding the spread of COVID-19.

“We will charge them and we will comply with whatever decision the court makes. Our job is to get them arrested for violating COVID-19 regulations and present them before the court of law. It is at the discretion of the magistrate or the presiding judge to decide the judgment that will be meted out to them.”

Odumosu while stating that clubbing had been banned in the state, said efforts were on to apprehend the owner of the club for prosecution.

“The owner of the hotel was not there, he disappeared, but recall that same happened when we raided the Victoria Club, but after his staff members called him, he came out of hiding and we charged him. The same thing happened at Club 38 in Bode Thomas, Surulere. The owner of this club will also be arrested and charged because if he didn’t open the club, people won’t go there.

“The Cubana Club we first raided was in Ikeja, this new one is on the island. People must know that clubbing has been banned and they must obtain approval from the Lagos State Safety Commission for all other social engagements.”

The majority of the violators declined to speak with  our source  but a lady, who gave her name simply as Princess, said, “We were on our own at the Cubana and that was from where we were arrested.”