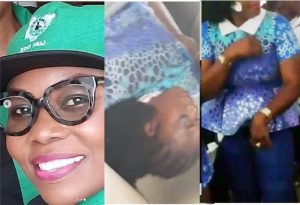 In the early hours of today, a video went viral of a Nigerian Journalist, Eunice Osarugue Egbobawaye who slumped and later died while attending a reunion party at the prestigious Saint Maria Gorreti School in Benin City Edo state.

While some persons have blamed her death on the deplorable state of health care facilities in the country, others have slammed the individuals who attended to her within the first few moments of the incident.

A medical practitioner, Dr. Uyi Usoro gives a vivid detail of the event as well as the cause of Death.

She was said to have been dancing in the school hall when she suddenly slumped on a chair. It was presumed that she was tired, but when she did not respond, doctors were alerted to check her. No peripheral pulses were palpated. A mis-information about her being an asthmatic patient led the doctors to administer puffs of Salbutamol to her via inhaler.
When the school doctors were alerted, we met her lying on the ground outside the hall. We stopped the inhaler, could only palpate the left temporal pulse and continued anti shock management and CPR. We then rushed her to the nearest private medical centre opposite the school but they had no oxygen.

She was then moved to Central hospital in the hope of getting full complement of resuscitation facilities viz oxygen, defribillator. Upon arrival at central hospital, she was pronounced BID (brought in dead). No defribillator.
We continued administering CPR on the way to UBTH, in expectation of getting a defribillator. Although a team was at reception to receive her, they confirmed no cardiac activity and also confirmed as dead.

Her corpse was then transferred to Stella Obasanjo Hospital and Morgue.

In this detailed report by Dr Uyi, one of the hospitals where Madam Eunice was taken to had no Oxygen. Could this have been the reason why she didn’t survive the attack, since there was no adequate emergency treatment for the victim?

This calls for concern as it seems medical facilities in Nigeria are not properly equipped to handle emergencies when such arise. What do you think about this sad reality?