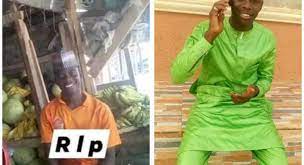 We reported months back that a fruitful seller in Zamfara was killed by a tigger-happy soldier Gusau, Zamfara State, over banana.

Here’s the update of that story, the solicitors to the family have asked the Minister of Defence to direct the Nigerian Army to pay his family N200m as compensation.

The solicitors also urged the Army to punish the killer in accordance with the laws of the land.

Recall that  fruit vendor,  identified as Abdulkadir Musa, was shot dead by a gunman suspected to be a soldier for refusing to allow him to go away with his bunch of bananas without payment.

In a letter by the firm of M. B. Idris & Co dated June 8, 2021, and signed by Bello Idris Galadi, the firm stated, “As solicitors to the family of the late Abdulkadir Musa (Mai Ayaba) of Gusau, Zamfara State, on whose behalf and firm instructions we write to you herein, you may wish to be notified that on Sunday, May 9, 2021, around 5pm, two soldiers in mufti visited Abdulkadir at his shop located at the Hayin Buba junction, Bye-pass Road, Gusau, and priced a bunch of bananas.

“You may wish to be informed that an argument started between the soldier and the deceased over the price of the bunch of bananas; thereafter, a complaint was lodged against the soldiers at the Gusau Police Area Command upon which three police officers rushed to the scene and disposed of the case.

“Retrospectively, the police officers urged the soldiers to give the deceased N500 for the bananas they bought, which they did, as if the case was over, only for the soldiers to return in a couple of minutes with two firearms and one of them shot Abdulkadir in the chest and he died a few minutes later.

“It may interest you to know that even though the soldiers escaped immediately after the killing, but they were afterwards arrested and are currently undergoing interrogation by both the Army authorities in Zamfara State and the police command.”

The firm called on the Chief of Army Staff to do something immediately in order to compensate the family, whose breadwinner was mercilessly murdered by the soldiers without any reason.