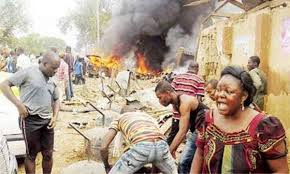 In separate attacks, two local government areas of Kaduna State, have been invaded killing 19 people, while scores were injured.

The attack happened on Saturday,

Mr. Samuel Aruwan,   the State Commissioner for Internal Security and Home Affairs, confirmed on Sunday that the attack happened on Saturday.

Aruwan,    said, “On a sad note, the Kaduna State Government has received reports from security agencies of the killing of 19 citizens in Birnin Gwari and Kajuru local government areas of Kaduna Central Senatorial District.

“The citizens were killed by bandits at Kutemeshi village in Birnin Gwari and Kujeni village in Kajuru, where several others were left with bullet wounds.”

He also said some shops filled with valuable items were looted.

Aruwan added, “Some of the injured have been moved to a neighboring state closer to Kutemeshi for urgent medical attention, while others are in transit to an orthopedic hospital in Kaduna.

“So far, only the 14 corpses have been recovered from Kutemeshi. The Kaduna State Government will provide updates on any emerging developments.”