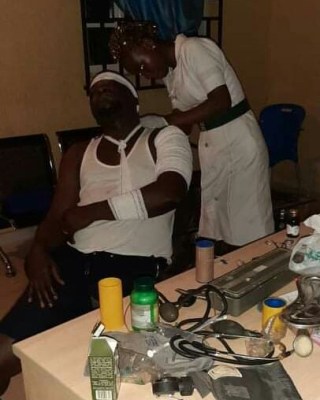 A journalist in Imo State,  identified as Precious Nwadike, has allegedly been beaten to a pulp by a brother to Hope Uzodimma,  the state governor.

Nwadike, who is the editor of an Owerri-based newspaper, Community Watchdog, said he was beaten by the governor’s sibling, simply identified as Uche, on Port Harcourt Road in Owerri.

Uche is alleged to be one of the contractors handling road projects in the state.

NEWSNAIJA learned Uche, who reportedly moves around with police bodyguards, allegedly slapped the journalist, who unknowingly drove past the site of his road renovation work.

Nwadike, who was beaten, battered, and left unconscious, was revived and taken to hospital by passers-by.

NEWSNAIJA further gathered that Nwadike’s newspaper, Nigeria Watchdog, is known to be critical of Uzodimma’s administration.

The victim told our source that he was afraid for his life and that his family was already making arrangements to evacuate him from Imo State.

He stated, “Uche Uzodimma and his goons really meant to kill me. The brutality unleashed on me yesterday (Tuesday) runs deeper than meets the eyes. Nobody will want to beat somebody to death, because he breached his workspace. There was no road sign to indicate that it was a fresh work.

“By the time I was taken to hospital, other vehicles were using the same road without any disturbance. I just have to keep a low profile; no one knows what they may do next.

“I had visited the National Identity Management Commission’s office on Port Harcourt Road to enrol for my National Identity Number. Upon arrival at the office, I was given a form and referred to the Owerri Capital Development Authority’s office on the same road for data capturing. Knowing that it was already getting late, I pleaded with a lady employee of the agency to accompany me to the OCDA to assist and she obliged.

“The lady and one other woman who came for the enrolment got into my vehicle and we drove to OCDA. On getting to the OCDA office, a man slammed my bonnet with his hand and asked us to reverse. At first, I thought it was one of those thugs around the OCDA office. It was when the other person, who was flanked by two policemen instructed us to reverse the vehicle, introducing himself as the contractor of the Port Harcourt Road project that I realized that they were renovating the road as there was no road sign to that effect.

“I obeyed even when I didn’t know their reason for ordering us back. It was later discovered that the said contractor is actually Governor Hope Uzodimma’s younger brother, Mr. Uche Uzodimma. While I tried to park, the same man began to deride me, describing my vehicle as rickety and threatening to deal with me if I delayed.