ISLAMIC CLERIC ARRESTED FOR BEATING PUPIL TO COMA IN KWARA 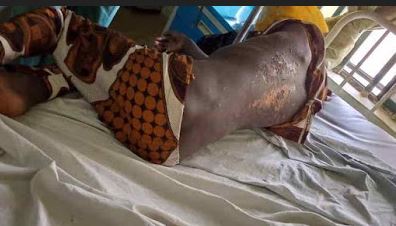 A human rights lawyer, Identified as Aishat Temin, has condemned the act of a cleric who allegedly beat a student to a coma for stealing money from a local safe also known as a piggy bank.

The police had arrested the cleric known as Moshood Alabi, who allegedly beat up his pupils in his Quranic School to coma for stealing a locally made safe.

NEWSNAIJA learned that the cleric, after beating the boy, also instructed three of the students to give the victim 10 strokes of the cane each, which made him fall into a coma during the punishment.

Speaking in a radio program aired on Diamond FM 88.7 on Sunday, Temin said the law “does not allow the cleric to beat the boy or give him the power to order his students to beat up another student”.

Some of the contributors to the programme also suggested that the government should organize refresher courses to enlighten owners of Quranic schools and lessons in the state.

A contributor, who simply identified himself as Sakariyau from Baboko in Ilorin, said the government should organize seminars for owners of Quranic schools to let them know how to treat students put in their care.

Ajayi Okasanmi,   spokesman of the Kwara State Police Command, said the Police had arrested Moshood, adding that the arrest was carried out by officers of the Oloje Police Division after the case was reported.

The cleric has been on the run after the case was reported to the police by the National Human Rights Commission, Kwara State branch.

The PPRO said, “Though the cleric was on the run after discovering that the student had gone into a coma, but our officers went fishing him out from his hideout.”

The PPRO further stated that the boy had been revived and was recuperating at a private hospital in Ilorin.

It was further gathered that the case would soon be transferred to the Gender-Based Violent Unit of the Police Command in Ilorin.

Okasanmi said the cleric would be charged to court after the resumption of members of the Judicial Staff Union of Nigeria, who are currently on industrial action.