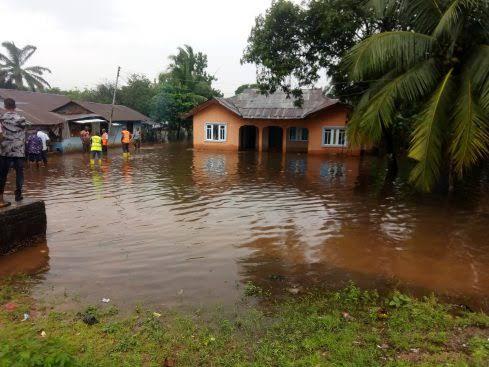 NEWS reaching us says residents of Amauzairi, in the Isiala Mbano Local Government Area of Imo State, have been forced to flee their homes after a flood drowned 15 of their homes.

Our witness noticed traders in Nkwo Amauzairi counting their losses.

NEWSNAIJA has reported that the incident occurred after a night  downpour in the neighborhood.

According to a community leader, identified as Collins Anoro,   the flood wreaked devastation in Okwele, forcing most residents to flee to nearby communities.

He said after  the flood situation worsened two months ago, a bread factory in the heart of the community closed down.

The factory owner, identified as Bernard Ezebuike, confirmed the news to our source and claimed he had given up trying to reopen the bakery.

He said “There’s no point in staying there again,” he remarked. I’ve spent practically all of my savings attempting to stop the water, but it’s been fruitless. I bought 50 bags of cement to contain the water the last time, and the cement was packed within the factory. We intended to utilize it the next day, but the deluge destroyed everything.”

Mrs Chibuzo Enyioha, who sells fried plantain in Okwele, also stated  that the water on Saturday caused her to lose a bag of beans and other products.

“Since this flood has been causing us so much grief in this neighborhood, it has never been this bad. On Friday, I bought a bag of beans and kept it inside. But look at what I’m seeing now: soaking beans and yam tubers that I can’t seem to locate,”.

Chief Chikwem Onuoha, a local benefactor, said the community had spent over N5 million attempting to solve the situation.

After the recent flood in the community, he grieved that all of their efforts had come crashing down in front of their eyes.

Meanwhile, Anoro claimed that if the government did not interfere, citizens would renounce their membership in the community.

He claimed that the decision was made following a recent community meeting over the area’s ongoing floods.