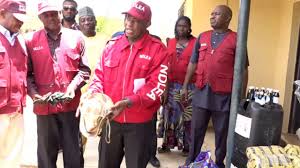 The Imo State Command of the National Drug Law Enforcement Agency (NDLEA) has arrested 165 suspects between the ages of 17 and 35 for dealing in drugs from January till now.

NEWSNAIJA learned that 145 of the suspects were male, while 20 were female.

It was learned that the command also seized 959.677 kilograms of hard drugs, including cannabis Sativa, cocaine, heroin, methamphetamine, diazepam, and tramadol, among others.

The state Commander of Narcotics, NDLEA, Nse Inam, speaking in Owerri on Tuesday stated that methamphetamine, locally known as mkpuru mmiri, was being abused on an increasing level.

Inam said the command successfully prosecuted and secured the conviction of 24 persons in the period under review, adding that many cases were still ongoing in court.

He further stated that “The Imo State Command of the NDLEA counseled 97 drug users arrested during an operation. It also rehabilitated three drug addicts, while two are presently in our facility for the same purpose,”.

The sector Commander who has just been promoted to Assistant Commander General of Narcotics, further stated that in spite of the COVID-19 pandemic, the command carried out public enlightenment and sensitization programs in the state.