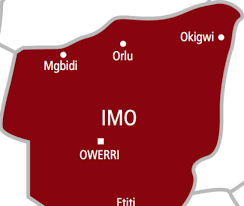 An Owerri-based landlord, identified as  Mr. Emma Ishiguzo, on Monday evicted his tenant for lending a widow the sum of N50,000.

Newsnaija gathered that the widow, Mrs. Patience Ishiguzo, is the wife to the landlord brother’s wife, who needed the amount for the burial of her mother in Akwa Ibom State.

The tenant, Mr. Stephen Nnadi, who has a shop along the Mbaise Road, Owerri, said prior to the action, the landlord came to his shop to buy some items, only for the shop to be broken down by a court bailiff accompanied by an armed policewoman the next day.

He explained that prior to the coming of the bailiff, he was not owing to the landlord.

Nnadi said, “The only thing I know is that I had to lend my landlord brother’s wife the sum of N50,000, which she came to borrow for the burial of her mother in Akwa Ibom.

The widow recalled how she went to the landlord to beg for money for the burial of her mother and was only given N10,000.

When contacted, the landlord, he said the house belonged to him and that he had every right to evict any tenant whenever it pleased him.