I KILLED MY UNDERGRADUATE LOVER BECAUSE OF CHEATING, FUSTRATED EMOTIONS- SOLDIER BOYFRIEND CONFESSES 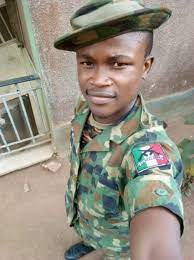 Matol, after she was found dead  was accused of killing her after he allegedly posted some grievous comments on her WhatsApp page, claiming he killed  her due to cheating and emotional frustration.

The soldier also claimed that he had informed Jennifer’s mother and his own aunt of his action and two of Jennifer’s  friends  identified as Vera and Eniye were not giving her good advice.

Security personnel attached to the Niger Delta University  said the body of the 21-year-old student was discovered yesterday with bullet wounds and a finger cut off. her  thumb was almost cut off too, suggesting that there was a struggle.

Her room was reportedly seen  scattered and filled with bloodstains.

Mike Okoli, the State Commissioner of Police  has ordered a discreet investigation of the incident.