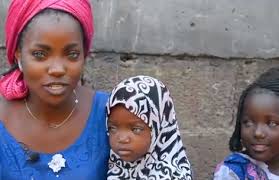 An Ilorin-based man, Abdul-Wasiu Omo-Dada, has drawn the attention of Nigerians for dumping his blue-eyed wife, Risikat Azeez and two daughters.

The PUNCH, in an exclusive video, had reported that Omo-Dada rejected his wife and two daughters because of the colour of their eyes.

Azeez, who said she sees clearly with her eyes despite the colour, lamented that her husband, who married her that way, changed when she gave birth to two kids with the same set of eyeballs.

The mother of two, who spoke in Yoruba Language, said, “I was born with these eyes and I also gave birth to my children with the same pair of eyes. Since I was born, I have never had any challenge with my eyes. I have never been to the hospital due to any discomfort. I thank God.

She stated that her husband is very aware of the condition of her eyes and loved her for how she was but. Things started getting bad when she had her first child and later the second child, my husband totally changed and he would shut me up and walk out on me whenever I tried to start a conversation with him.

She said “His parents even told him, ‘Will you keep on giving birth to children with this kind of eyes?’ He changed to the extent that he would leave the house for a whole week before coming back home. There was no food and no provision that I had to go to her parents’ place to feed but her parents later asked me to leave his house. Since I left till now, he has not shown up to ask why I left or ask after me.

Many Nigerians have since taken to social media to tease Omo-Dada for dereliction of fatherly duty.

A tweep, @Mosopemi, wrote, “I’m just so surprised he had the first daughter with her then the second before deciding not to be with them anymore. Oh! Didn’t he see his woman’s eyes before agreeing to be with her?”

@Adebiyodeji stated, “He obviously needs an excuse to neglect his responsibilities. Unfortunately, the same man will wake up at age 60 and start telling the world how his family neglected him and begging to feed or start claiming “I am their father” when they become successful. Shior!”

@007Officer said, “I literally fall in love automatically with people with grey and blue eyes but some idiots desert their wives because of same. Some men truly are scum.”

@estherclimate stated, “Very sad.. as someone with different eyes, I am angry for her. She has beautiful eyes and should not be shamed for her what she didn’t have a hand in.”

@Jesugbemileke said, “Ignorance is really killing people. Beautiful natural eyes that some people will have to buy contact lens to match. I Just imagined myself with that eye, damn I will always stand out. With this, the face of God has shined towards her. She is now an endorsement deal from Ilorin.”

@Danlerd said, “Some people go blind during surgery in an attempt to have blue eyes. God gave her the best of ocular beauty but well, the ignorant husband won’t see that. Illiteracy. Maybe they told him she’s the reason that he’s poor. I just hope he’s Dangote that we know.”

@ViktorKubowski tweeted, “This woman is so beautiful. Her eyes are to die for. Make the man talk wetin dey do am. Maybe he dey find boys.”

@DrK_CVO wrote, “Thank God the mother and the girls have blue eyes. If to say it is just one of the daughter who has blue eyes and both the mother and one girl have black eyes, the husband would have accused the woman of cheating.”

@kwaraguy said, “She actually made the news because of her blue eyes. Men are becoming very irresponsible lately. Issues like this are common in Nigeria. Emergency fathers everywhere.”

Uche Akolisa commented on Facebook, “Very beautiful woman with a disarming smile. When will men stand up to what they really want? Allowing your parents to pressure into rejecting your wife and kids.”

Bright Igwe also wrote, “Oh my goodness what beautiful people! God’s work is beautiful no matter what eye colour you have. Your husband is ignorant. You and your children deserve better.

@Favourbenjaminphotography appreciated the woman and her kids on Instagram, saying, “Damn! I would cherish this lady for those blues eyes if she was mine and I would love our kids and create stunning artistic portraits of them all over my home. Can you imagine the primitive nature of that community and husband?”

@onajitephilips wrote, “She’s so beautiful even the girls too. What mainstream and top modelling brands are looking for. Chai! The husband just threw away gold. They say when the worth of a thing isn’t known abuse is inevitable!”