HOUSEWIFE KILL HUSBAND FOR SLEEPING OUTSIDE THEIR MATRIMONIAL HOME 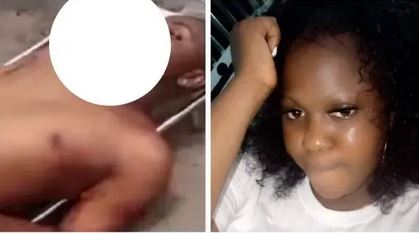 An enraged housewife, identified as  Mrs. Okiemute Dafe, has been arrested by operatives of the Delta State Police Command for allegedly hacking her husband to death with a machete following a domestic misunderstanding.

NEWSNAIJA learned that the woman reportedly hacked her husband, simply known as Dafe, also known as Best Cartel to death on Kulup Street, off Ekrejegbo in the Ughelli North Local Government Area of the state.

Sources said issues started when the deceased, who slept outside the matrimonial home the previous night, returned home only to be confronted by his angry wife.

It was further learned that the disagreement between the couple worsened into a physical confrontation and the suspect attacked the deceased.

A source said, “ the deceased and his wife had a heated argument and the suspect reportedly attacked him with a cutlass on the head”.

Dafe, was said to have earlier stabbed the victim before using a cutlass on him.

Consequently, the deceased also known as Best Cartel, sustained severe cuts before he was rushed to the Ughelli Central Hospital by neighbors.

However, he was pronounced dead by medical personnel at the Accident and Emergency Unit of the hospital.

The woman, on seeing the gravity of her action, attempted to run away from the scene, but she was apprehended by youths and neighbours.

The angry mob tried to set Okiemute ablaze after the husband was pronounced dead, however, she was rescued by policemen from the Ughelli Police Area Command.

Unhappy, the mob followed the police team to the station and attempted breaking into the station, but they were dispersed by operatives, who resorted to firing gunshots in the air.

DSP Bright Edafe,  the acting Police Public Relations Officer for Delta State Command, confirmed the incident, saying it happened when the couple had a disagreement.

The PPRO further confirmed that Okiemute had been arrested and was currently in custody undergoing interrogation.