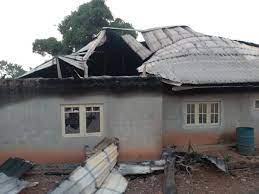 On Monday, fewer than 20 houses were, burnt by gunmen suspected to be Fulani herdsmen, in Umu-Ugadu and Obodo Ocha villages, Umuogodo-Akpu Ngbo community, in the Ohaukwu Local Government Area of Ebonyi State.

According to a reliable community source, the attackers who invaded the area at about 4 am equally killed a native of the community.

The source, who spoke to our source on condition of anonymity, said many houses were razed down in the area by the invaders.

The source said the incident had caused panic in the area, as natives had left the area for other neighboring communities for the safety of their lives.

“My brother, it was not a small thing this morning. They have hit our community again. This morning, they burnt down many houses. As soon as they started, I had to move my parents to Okwor Area for safety.

“In fact, my father just informed me now that he saw a vehicle carrying a dead body from the area. One person was killed in the incident.

“They came into the community and started shooting sporadically and burning down houses. It took the intervention of some of our people who came out to engage them in a gun battle.

“We are suspecting Fulani herdsmen. Recently, because of the way they were dealing with farmers in the community, we are no longer comfortable with them and we asked them to leave. And two weeks ago, they were sighted in the area around the community. So, they could be responsible for the attack,” the source said.

The Ebonyi State Government, on Monday, confirmed the incident, saying an investigation was ongoing to unearth the attackers.

Chief Stanley Okoro-Emegha, the Commissioner for Internal Security and Border Peace, stated this in a telephone interview with our source in Abakaliki.

According to the Commissioner, “They said its Agila people, but for now, nobody can say where the attackers came from. That part of Ngbo has issues with the Agila people of Benue State, and so, we are still not certain about the attackers.

“But if it’s herdsmen, then it means we will start tracing where they came from. This is actually what happened in the early hours of this morning and we are investigating it.

“As for the number of death, nobody has told us that anybody died. There is no such record yet.

He added, “Yes, some houses were burnt. Those who we contacted from the place, said there were some casualties.

“But troops of soldiers and many policemen were mobilized and moved to the area as early as 5.30 am today and we are making sure that those who attacked the area are fished out.

“They mentioned that three persons died, but we are yet to confirm that. We don’t have such a record yet, but we are investigating.”

The Commissioner of Police in the state, CP Aliyu Garba, said his men had been mobilized and deployed to the area.