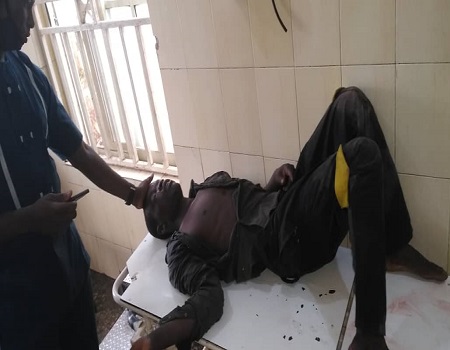 A 23-year-old security guard Named Sunday Ezra, has reportedly been beaten to death by yet to-be-identified persons at the New Trafford Hotel and Suites in the Gwallameji area of Bauchi metropolis
From our source it was learnt that the incident occurred around 2am yesterday when residents of the area descended on the deceased and beat him until he became unconscious.
It was also learnt that a mobile phone got missing on the premises of the hotel and the deceased was suspected to have stolen it, but he protested his innocence to no avail, adding that the crowd that gathered did not believe him and started beating him with the aim of recovering the phone, but he was said to have maintained his innocence.
In the process, Ezra was said to have slumped and lost consciousness, while the missing phone was later found by a corps member, who returned it.
From another source and a neighbor to the deceased, who spoke on condition of anonymity, stated that Ezra sustained fractures on his left arm and right leg as well as injuries to his face.
He added that the deceased was stripped and abandoned in a hut on the hotel premises until the security guard, who was to relieve him, saw him in that state and quickly alerted their security outsourcing firm.
The neighbor said, “The security company sent its supervisor, who came to the place and when he saw Ezra’s condition, he informed his grandmother and she called me. “We went to the Yelwa Divisional Police Station and made a report, but the police personnel said we should go and bring him.
“We went and conveyed him to the station in a tricycle and from there, we rushed him to the Abubakar Tafawa Balewa Teaching Hospital around 2pm and medical officials pronounced him dead around 3.15pm.
His neighbor said “they were surprised how he was dumped in a place for several hours without anyone taking him to the hospital until his colleague came.