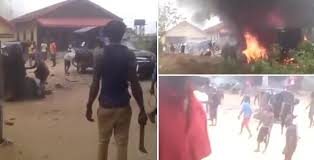 The Abayi police station in Aba, the commercial hub of Abia State was burnt down by yet-to-be-identified hoodlums in the early morning hours of Tuesday.

The hoodlums also burnt all the operational vehicles parked within the premises of the police station.

Ogbonna,   said the hoodlums numbering over one hundred had attacked the police station from a nearby compound with the intention of taking over the station.

The Police spokesman added that the attackers who freed some suspects in the police station threw petrol into the station before gaining entrance into the facility.

He said some policemen on duty engaged the hoodlums in a gun battle, which resulted in the death of one policeman and some casualties on the side of the hoodlums, while many of them fled with bullet injuries.

The PPRO revealed that some of the hoodlums had been arrested by the police, while a manhunt had been launched for those at large.

Ogbonna, urged all health facilities in the state especially in Aba to report anybody with suspected
bullet injuries that come for treatment to the police.

He said, “Hospitals can give treatment to people with suspected bullet injures to revive them, but they should do well to report such a person to a nearby police station.”