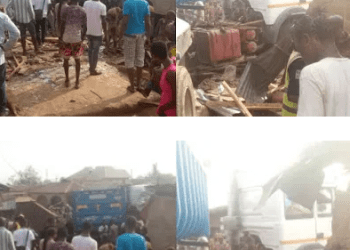 The headless body of a woman identified as Queen Clever, aged 34-year-old has been discovered in Ozoro, Isoko North Local Government Area of Delta State.

NEWSNAIJA learned that the incident, which occurred on Monday, had created panic in the community.

A source close to the family stated that the victim, who hailed from the Urude community in Ozoro, was a popular seller of roasted plantain and yam at the busy Owhelogbo junction on the Ozoro-Asaba Road.

The source said, “Queen’s headless corpse was found in a bush on Eterighe Avenue. It is very painful that a young hustler was beheaded and have her organs removed.

“Besides her head, other vital organs like her breasts and private parts were also removed by the killers, who we believed to be ritualists or Yahoo plus boys.”

Bright Edage, the acting Police Public Relations Officer in the state, when contacted,

Confirmed the incident, adding that the corpse had been deposited in the Ozoro General Hospital mortuary.

Edage stated, “Yes, it is true; no arrest yet and an investigation is ongoing; the police are on top of the situation to bring the culprits to justice,”.