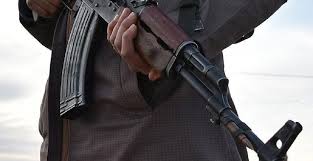 There was stiffness in Ughelli, Delta State, on Saturday as gunmen reportedly shot dead a generator technician, identified as  Mr. Kelvin Asaboro.

NEWSNAIJA learned that the incident occurred on Uduerhe Street by the palace of the Ovie of Ugheli Kingdom.

It was further learned that the gunmen also shot four others during the robbery operation that lasted about 45 minutes.

Sources in the community said the gunmen trailed a traveler from the Otovwodo motor park to the area, robbed and killed him, while injuring many others.

The source further stated, “The body of the generator technician was later deposited in the morgue, but indigenes and other residents of the area, especially youths, took to the street to vent their anger.

“Their anger was that there were no security operatives to challenge and apprehend the hoodlums during the robbery.”

DSP Onome Onovwakpoyeya, the police spokesperson in the state, when contacted, confirmed the incident.

She said, “Yes, it is true and the command is investigating the incident,”.