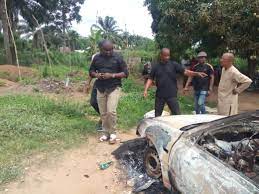 Vehicles and about five police patrol vehicles were also burnt in addition to the building, which was razed down by fire during the attack.

Six exhibit vehicles, including Keke NAPEP and motorcycles, were also burnt in the attack.

Confirming the incident, Geoffrey Ogbonna,   the Police Public Relations Officer, said the incident took place between 12 am to 1 am Monday morning, disclosing that the gunmen “burnt exhibit vehicles” and station vehicles.

The gunmen, he said came in their numbers and armed with dangerous weapons, adding that they came with improvised explosive devices.

Ogbonna,    said a special police squad was at the station on Sunday and left before the incident happened, explaining that the location of the police station was vulnerable because of many outlets.