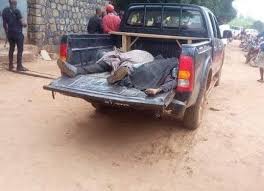 Report reaching us says Gunmen on Wednesday killed a policeman and a commercial motorcyclist near Etenyi village, Igumale, in the Ado Local Government Area of Benue State.

A Community resident, who identified himself simply as Joseph, told our source on the phone that the gunmen stormed the village around 6.30 am and laid ambush along the Rijo-Ogege bridge leading to Igumale.

The deceased police officer was said to be on his way to resume duty at the Igumale divisional police station when he ran into the ambush, while the motorcyclist was on his way to Otukpo.

Joseph said, “I was traveling from Igumale to Otukpo to see my family on my motorcycle. But by the time I got to Etenyi village, a few meters away from the local government secretariat, I heard gunshots.

“I ran for safety. Not too long after the gunshots, I saw two dead bodies in a police van. Nobody knew what happened before those people were killed. There is no crisis in Ado presently and for over three months now, we have not experienced such a thing in Ado.”

James Oche, the Chairman of the council area, confirmed the incident.

Oche,  said “The incident happened early this morning when the gunmen opened fire on police officers. One of them died instantly, the bullet shattered his head. One passerby, who was on a motorcycle, was also killed,”.

DSP Catherine Anene, the state Police Public Relations Officer, who confirmed the incident, said the two dead bodies were recovered from the scene and taken to a mortuary while the investigation had commenced.

The PPRO said, “Our men in Ado were on patrol this morning when suddenly, some gunmen opened fire on the patrol vehicle, one of the Police Officers was hit with another man who was on his motorcycle, they both died and their bodies were taken to a mortuary in the town.