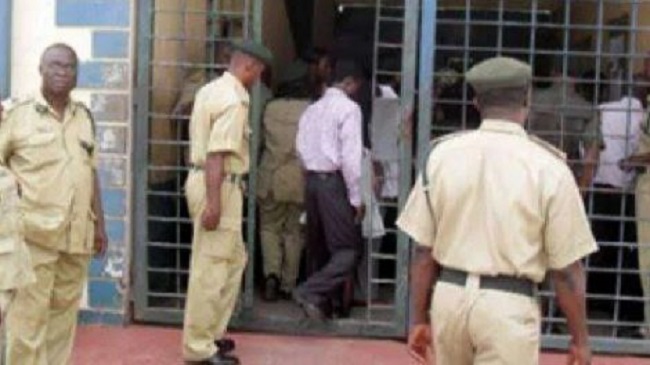 The Assistant Inspector General of Police in charge of Zone 8, Lokoja, Ayuba Edeh, has confirmed the killing of two soldiers at a roadblock before the Kabba correctional center, while over 100 inmates escaped when gunmen attacked the facility overnight.

NEWSNAIJA gathered that the  soldiers were said to have mounted a routine checkpoint about 50 meters from the prison located along the Lokoja- Okebukun-Kabba highway when the hoodlums came and rained bullets on them before attacking the prison facility.

An eyewitness said on Monday morning that the gunmen also sprayed bullets on an unfinished building where the soldiers usually occupy before they broke into the correctional center and released over 100 of the inmates.

The witness said some of the correctional officers on guard were fatally injured, while one of the soldiers who made an effort to flee was also hit in the leg.

A source also confirmed that three of the prisoners were rearrested at about 8.00 am on Monday beside Kudon hotel, Kabba, as they tried to board an Ilorin-bound vehicle.

Confirming the incident, Edeh said that the state Commissioner of Police and other heads of security agencies have swung into action to do an assessment of the cause of the invasion.

Our source furher  learned  that the state controller of the correctional service, along with the state security adviser, Jerry Omodara, have gone to Kabba for an on-the-spot assessment.