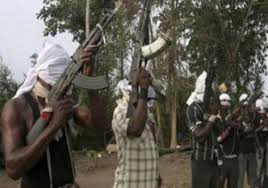 Gunmen have attacked the Tere-Ama community in the Port Harcourt Local Government Area of Rivers State and killed one person on Wednesday.

Although the reason behind the attack on the community is still unclear, a resident in the area who only identified himself as Somieri told our source that the gunmen attack may be connected to their regular extortion of business owners in the area.

NEWSNAIJA learned that the paramount ruler of Somieri-Ama community, identified as Chief Tamunokuro Somiari,  a neighboring town had raised an alarm over a threat to his life after some gunmen attacked him at his house.

Nnamdi Omoni, the spokesman of the Rivers State Police Command, when contacted confirmed the incident, adding that Joseph Mukan, the Commissioner of Police, had ordered an investigation into the incident with a view to arresting the perpetrators and unraveling the crime.

The State PPRO  further disclosed that the corpse of the victim has been handed over to his family for burial.

Omoni said, “A man of about 30 years old was found dead in his pool of blood and he was released to his family for burial in line with Islamic rites as requested by family because the victim is a Muslim.

“The Commissioner of Police  has ordered investigations into the incident and we are at the trail of the killers.”