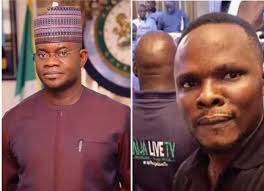 Yahaya Bello, the Kogi State governor, has withdrawn the case of defamation he filed against a Bayelsa-born blogger and owner of Naija TV Live, Mr. Saint Onitsha after he later pleaded with the governor for forgiveness.

Kingsley Fanwo, the state commissioner for Information, made this known on Wednesday in a statement issued in Lokoja.

The commissioner described governor Bello as media-friendly and would not want anything that may destroy the existing cordial relationship between him and the media.

It could be recalled that Mienpamo through his online platform had allegedly accused the governor of spending a massive sum of N7bn on a provision COVID-19 isolation center which was later blown off by wind sometime in 2020.

The said publication generated a lot of controversies which led to the arrest of the blogger by the Department of State Security and his later arraignment at the Federal High Court sitting in Yenagoa.

The commissioner said the suit was withdrawn and struck out by Justice Abimbola Awogboro, Since Miepamo had apologized and pleaded with governor Bello to withdraw the case on realizing that his publication lacked facts.

Awogboro,  said, “The governor has decided to forgive Saint Mienpamo for so many reasons. One of the reasons is that he apologized to the governor and he has learned his lessons from this to always follow the ethics of the profession.

“We are very sure that he is a young journalist that has been doing very well. So, we do believe that it is an error on his part.”