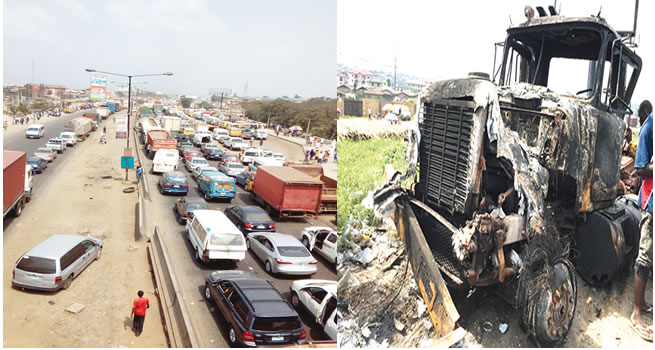 On Wednesday a fuel tanker caught fire at the Magboro section of the Lagos-Ibadan Expressway.

The incident, which happened around 06 am, caused gridlock at Magboro, outward Lagos-Ibadan Expressway.

NEWSNAIJA learned that firefighters have arrived at the scene of the fire outbreak.

It was further gathered that the fuel being conveyed by the tanker had spilled to the other side of the expressway leading inward to Lagos.

This development is coming barely three weeks days after a fuel-laden tanker went up in flames at the Kara end of Lagos-Ibadan Expressway.

The Federal Road Safety Corps confirmed that no fewer than two persons died with 29 vehicles burnt in the November 7 incident.