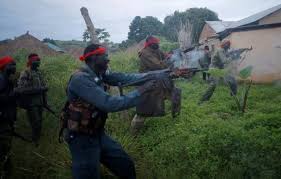 four members of a vigilante group, a Security Officer, and an unspecified number of bandits were killed on Thursday when bandits struck at Diskuru village in the Dandume Local Government Area of Katsina State.

Sources said the bandits, who were estimated to be over 200 and armed with General Purpose Machine Guns and AK-47 rifles, stormed the village on Wednesday night and carried out what residents called a reprisal till early on Thursday, during which time they allegedly killed an unspecified number of people and kidnapped many young girls.

The bandits were said to have attacked the village to avenge the death of three of them during an earlier attack last week.

It was further learned that due to the deplorable condition of the road leading to the village, the bandits had a field day before a security team made up of the police, soldiers and the vigilante group in the council could reach there.

The security team was said to have confronted the bandits along the cattle route in the Faskari Local Government Area, which resulted in the exchange of gunfire that led to the death of the five victims.

The Nigerian Air Force was also said to have assisted in neutralizing many of the bandits, who were retreating into the forest.

SP Gambo Isah, The spokesman for the Katsina State Police Command, confirmed the incident, adding that a mop-up operation was still ongoing to determine the number of the bandits killed.

“The incident happened at Diskuru village in the Dandume LGA and the bandits were there on a reprisal. Many of them were killed as the Nigerian Air Force personnel and soldiers had to be called in as reinforcement. I cannot give you the exact number of bandits killed as the mop-up operation is still going on, but a security officer (not a policeman) and four members of the vigilante group were killed during efforts to repel the bandits,” he said.