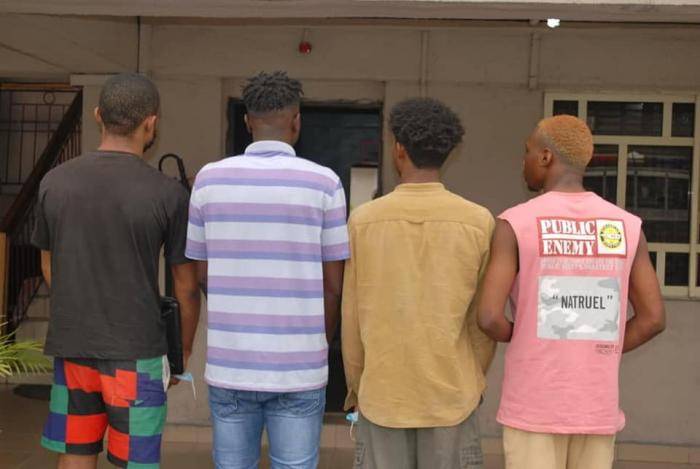 The Economic and Financial Crimes Commission ( EFCC)  on Thursday arrested four students of the University of Port Harcourt for their alleged involvement in Internet fraud.

A statement by the Public Affairs Department of the EFCC, Port Harcourt zone, made available to one of our sources,  stated that their identity of the suspects was given as Prince Hyacinth, Rex Emadifie Oghene, Odili Ifeanyi and Uduak Williams.

,The EFCC in its statement said, “groundwork investigation established that the suspects were majorly involved in a romance scam and also acted as pickers for an organized ring of fraudsters.

“While Prince Hyacinth paraded himself as a Spain-based marine engineer to bait his victims, Rex Emadifie Oghene posed as a rig engineer based in the United States,”.

It was further disclosed that two other suspects, Ifeanyi and Williams, presented themselves as rig/marine engineers to defraud their victims.

The EFCC also stated that “Between the four, a total of $111,500 from 15 victims has passed through their hands, adding that suspects will be charged to court as soon as investigation is concluded,”.

Sam Kpenu, the spokesman for the university, Reacting, said the suspects were not students of the institution, as the institution was not in session.

Kpenu said, “Anybody can claim to be a student of Uniport because our institution has a unique name. So, we are going to get their details to confirm if actually they are our students.

The spokesman said “there is school and no one is on our campus. We have asked all the students to go home according to the Federal Government’s directives. So, for anyone to claim to be our student, we need to confirm.

He said “Uniport cannot accept liability of anyone arrested somewhere claiming to be our student. They are not students of our great institution.”