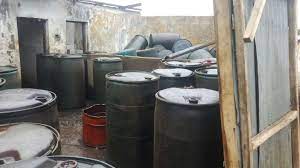 News reaching us says four persons were burnt to death near an illegal crude oil refining site around the Rumuji-Ibaa River in the Emuoha Local Government Area of Rivers State.

Although the cause of the fire outbreak could not be immediately ascertained.

It was learned that seven other victims sustained several degrees of burns.

An eyewitness, who identified himself as Onyema Okoro, told journalists in Port Harcourt that residents of the area woke up on Tuesday to see huge flames on the river.

Okoro,  stated, “As we woke up, we saw fire at the river between the Rumuji and Ibaa communities. We saw the fire and huge smoke. The crude oil was showing on the river so we could see the fire was still burning.

“The fire spread to the creek. When the flames had gone down a bit, we saw a burning boat but couldn’t see the people inside coming out.

“People were so afraid and couldn’t get close to the place. Later when they summoned the courage and got there, they found out that four persons had been burnt.”

Okoro added that the seven persons, who sustained severe burns, were rushed to the village for treatment.

He stated, “Some people that the fire burnt ran into the bush. The ones the rescuers could reach were taken to the village. But all the chemist shops there said they could not treat the burns.

“So, I don’t know what happened to them after. But for the ones who died, they were buried there, because according to tradition, when people die like that, they are not taken home for burial.”

He said some relatives of those, who died, were seen crying and holding their heads, adding that the community was in a sorrowful mood.

When contacted Nnamdi Omoni, the spokesman for the state police command, on Wednesday, said he had yet to get a report about the incident.