FOUR KIDNAPPERS WHO KILLED TWO OF THEIR VICTIMS IN RIVERS ARRESTED 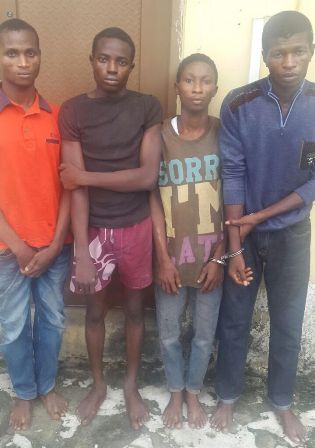 The Rivers State Police Command has arrested four suspects who allegedly kidnapped and murdered two of their victims.

Newsnaija learned among the arrested suspects was an 18-year-old-boy and a lady, who was involved in the abduction of Sokari Braide, a 65-year-old man, on 4 August 2020.

It was gathered that the suspected kidnappers shot and killed the younger brother of Braide, identified as Believe Briggs while attempting to resist the assailants.

Newsnaija further learned that Braide died a few hours after he was discharged from a hospital where he was receiving treatment for a gunshot injury.

Furthermore, it was revealed that the kidnappers received N1m from the victim’s family.