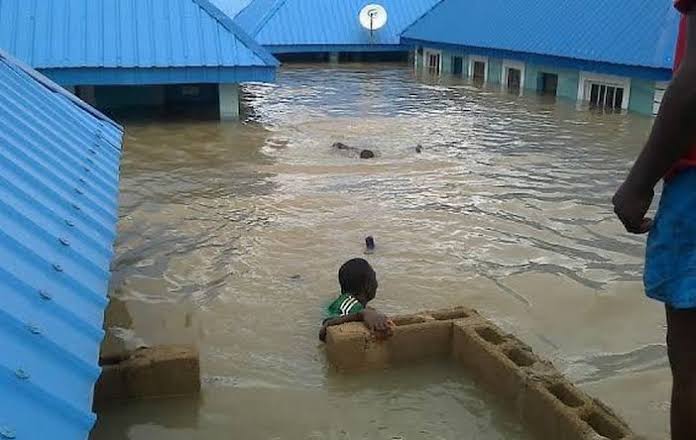 Not less than four persons were feared dead as flood caused havoc at Trademore Estate in the Lugbe area of the Federal Capital Territory on Sunday night.

NEWSNAIJA learned that about 166 houses and 26 vehicles were destroyed by the flood.

According to the residents on Monday said the flood was as a result of the downpour which happened all through the night on Sunday.

A resident who simply identified himself as Oladipo said some cars were swept away by the flood.

The resident blamed the incident on the promoters of an estate in the area who channeled water towards their area.

He said, “It rained heavily yesterday and before we knew it, houses were flooded. A man who came to buy drugs from the pharmacy here stayed inside his car for the rain to subside. The car later got submerged. He was one of those who died.

“Three bodies were also evacuated today, I was able to count 11 cars that were swept away; many houses were not spared. I cannot put figures to this.

I am trying to rescue my belongings. The flood was caused by an estate promoter who channeled its water towards our side. If something is not done speedily to address this, what has occurred is a tip of the iceberg.”

The General Manager, FCT Emergency Management Agency, Abbas Idriss, in a statement on Monday night, said 166 houses and 26 vehicles were destroyed by the flood.