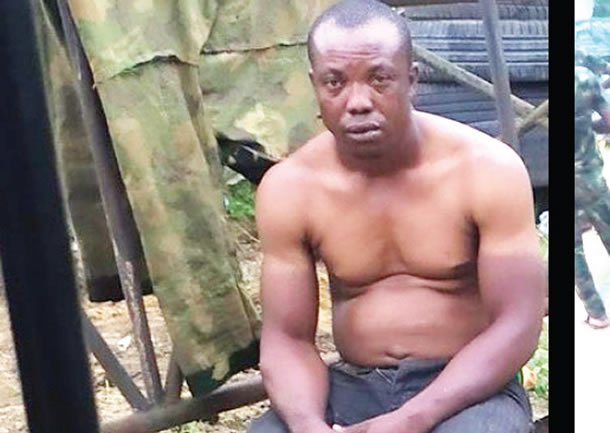 A man, identified as Nnamdi Emdriuokhe, has been arrested by men of the Lagos State Police Command for allegedly molesting a five-year-old girl in the Festac area of the state.

NEWSNAIJA Learned that the suspect was caught inserting his finger into the victim’s private parts after purchasing food from her mother.

It was further learned that the suspect continued in the act until the minor started bleeding from her private part before he was caught in the act.

Residents, who were angered by the development, reportedly bounced on Nnamdi and beat him up.

One Olagunju Oladele, who posted the incident online, said a soldier took the suspect into custody after rescuing him from the angry mob, adding that when the victim’s parents reported the matter at the police station, they were asked to pay some money so that the case could be registered.

Oladele,  stated that the parents were about to get compensation from the suspect when he intervened to get justice for the victim, adding that policemen attached to the Festac Police Division were handling the case.

He wrote on his Twitter handle, @deleconcept, “A full-grown man took advantage of a child. She was bleeding when the mum took her to d clinic. People around started beating the man until the Army in charge of the area took him into custody.

“They asked the parents to call @PoliceNG but as usual someone at the station asked for money to register the case. The parents didn’t know what to do and too broke to handle the case. So they opted out for compensation from the culprit. I got there & stopped whatever compensation.

“This man must face justice. I’d some help around and we called some friendly police officers to help pick up the man, this approach came with tips and recharge cards. I am presently at the Police Station at Festac Town Area command with the parents and the child to get justice. The victim looking at her molester.”

Muyiwa Adejobi, the state Police Public Relations Officer, when contacted, said Nnamdi had confessed to the crime, adding that the victim had been taken to hospital for medical examination.

The PPRO stated, “The victim’s mother reported that one Nnamadi Emdriuokhe came to the front of her house, where she sells food, and after eating, he started putting his finger inside the private parts of her five-year-old daughter.

“The suspect has been detained after confessing to the crime and the victim was taken to the Amuwo Odofin General Hospital for medical examination. The case is under investigation. The Commissioner of Police condemned the act and vowed to always go after criminals, who engaged in this inhumane act.”