FIVE KILLED AS HOODLUMS CLASH OVER ELECTION BANNER IN LAGOS 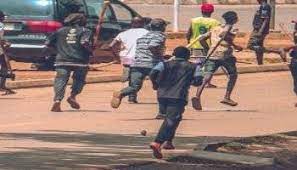 NEWS reaching us five persons have been reported killed in a clash involving factional members of the All Progressives Congress in Oko-Baba, in the Lagos Mainland Local Government Area of Lagos State.

NEWS NAIJA learned that during the clash, which started around 11 am on Wednesday, residents ran for safety as the hoodlums fought with different weapons, including guns, sticks, and machetes.

When our source visited the area on Wednesday, he observed the heavy presence of policemen in the community.

A Black Maria was also stationed at the roundabout, where a burnt car was still shouldering.

A witness, who gave his name simply as Saleh, said the fracas started when supporters of the council Chairman, Omolola Essien, attempted to erect her re-election banner at the Oko-Baba Roundabout.

Essien, said, “The hoodlums complained that the chairman had not done anything in their area since she was elected. The supporters felt angry and left without erecting the banner. But minutes later, some vigilante members loyal to the chairman came with guns.

“A shouting match started  between the two factions and the vigilantes released bullets. Five persons were killed and another five are receiving treatment in a hospital. The fight is because of this week’s APC primary election in the council.”

The chairman, blamed the mayhem on her opponent.

She said, “My driver went to the roundabout with his brother to put up my banner that had fallen. My opponent’s banner was also there, but I think his people intentionally fell my banner. We didn’t know his boys were somewhere there. As my driver’s brother was trying to raise my banner, he heard gunshots. The boys came and opened gunfire.

“Some mallams around the roundabout died. Some of our people were also injured. They burnt my vehicle.  I think five people died.”

CSP Muyiwa Adejobi,  the  state police spokesperson, promised to issue a statement on the clash.