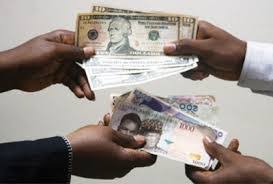 Oluniyi Ogundeyi, a  spokesperson for the FCID, who spoke on behalf of Galadanchi during the parade, identified the suspects as Alexander Olusoga, Amelia Osakwe, Abraham Moses, Precious Odih, and Ezemo Gadiel.

The spokesman stated that the suspects were arrested when detectives from the Special Enquiry Bureau, FCID Annex, got a tip-off on the case.

Ogundeyi said, “On December 22, 2020, one Churchill Udoh, who is the Executive Officer, Westgate Bureau de Change Limited, was contacted by his former staff, Precious Odih, that one Alhaji Ibrahim Yusuf, who is a forex dealer, has $500,000 to sell.

“Then Churchill Udoh indicated interest to buy and after negotiating with Alhaji Ibrahim Yusuf, he transferred the sum of N92,000,000, being the naira comparable of $200,000, into the Wema Bank account number, 0120733987, of Ametash Global Ventures on behalf of Ibrahim Yusuf, now at large.

“After the cash transfer, Churchill Udoh and Alhaji Ibrahim Yusuf met at the NNPC Tower along Alfred Rewane Way, Ikoyi, Lagos, where the sum of $200,000, which later was suspected to be fake, was handed over to him. Alhaji Ibrahim Yusuf asked Udoh to wait in the office while he returned the balance of $300,000 to the bank since Churchill only needed $200,000, and fled.

“Udoh was in the office at the NNPC Tower Ikoyi-Lagos, when a team of police detectives from the Special Enquiry Bureau, Force CID Annex, Lagos, acted aptly on a tip-off that some people were at the specific office to engage in an illegal forex transaction.