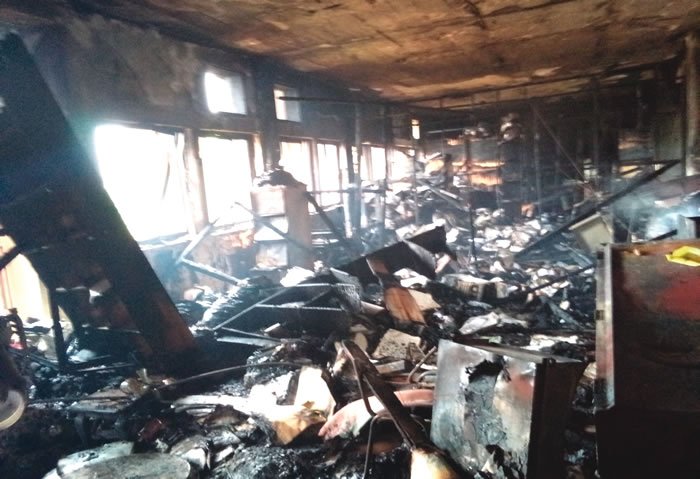 The section of the National Youth Service Corps (NYSC) in the federal secretariat, Asaba, the Delta State capital on Tuesday was consumed by fire, leaving one of the firefighters in critical condition as he was said to have fallen from the second floor.

NEWSNAIJA learned that the fire, which razed down the NYSC section of the secretariat around 7 am, caused panic among the workers who ran for safety.

When our source visited the scene, some of the workers including the NYSC state coordinator were seen trying to sort for some documents as properties with millions of Naira and files were destroyed.

Mrs. Olutayo Samuel, the State Coordinator NYSC, said everything in their section was completely destroyed.

Mrs. Samuel said, “What happened this very early morning is very unfortunate. I got a call that our office was on fire and I quickly rushed there, I don’t know how fire gutted the office. Nobody can ascertain exactly the cause of the fire.

“Virtually, everything there got burnt, everything in the office got damage. All the documents bunt to ashes but we have a backup. You know this is the technology age, so everything is in our system.

“Coincidentally, we took some of our systems to the camp and they are still in the camp, so there will be no setback because we have them in the system.

“I cannot cost it now but it is huge damage. But by the Grace of God, there is no life lost because that is the most important thing. I feel good because whatever damage will be replaced but if life had lost, we couldn’t have replaced it”

One of the staff of the Nigeria fire service, who spoke to our source on the condition of anonymity said the immediate response with their state counterpart prevented the fire escalated to other sections.

The staff said “We thank God that no loss was lost, but two of our men sustained injuries. One of them is critical because he fell from the second floor in the process of combating the fire.

“We quickly rush him to the Federal Medical Centre FMC, and we have spoken to the MD of the hospital he said they are attending to him. What really happened today is sad.

“Because of our quick response with our state counterpart, the fire could not escalate to all the building. Only affected the NYSC section. For now, we cannot really say what actually cause the fire, but we are taking it to be an electrical surge.