FIRE GUTS A BUILDING IN LAGOS 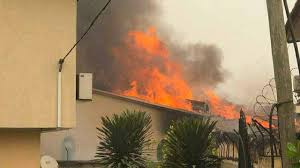 A fire has gutted a one-storey building in the Ikate area of Surulere, Lagos State, on Monday

Olufemi Oke-Osanyintolu,  The Director-General, Lagos State Emergency Management Agency, in a statement said that the fire was caused by an electric power surge when supply was restored to the area.

Oke-Osanyintolu added that the fire had been extinguished by emergency responders, who stormed the premises when an alarm was raised.

The Director-General, Lagos State Emergency Management Agency, stated,  “On arrival at Yaru Street, Ikate Surulere, Lagos, first responders discovered that the upper floor of a one-storey building caught fire due to an electric power surge on the restoration of power supply to the area.

“Fortunately, no life was lost and no injuries sustained. The combined efforts of the agency’s responders and firefighters from Lagos State and the Federal Fire Service were engaged in curtailing the spread of the fire to adjoining buildings and have extinguished it completely. The operation has been concluded.”