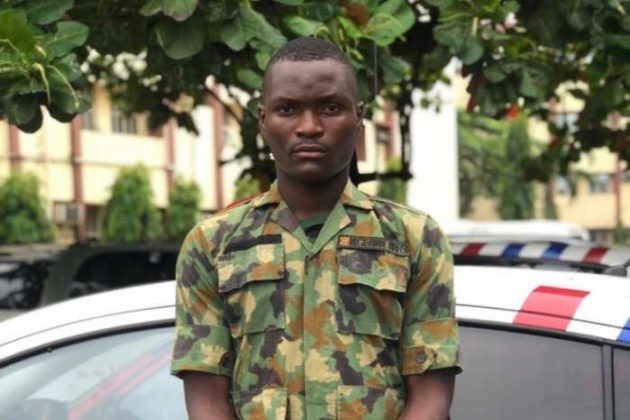 The Lagos State Police Command has arrested a suspected fake soldier, Johnson Godday, for allegedly robbing one Onyebuchi Nwanga of his valuables in the Ogudu area of the state.

CSP Muyiwa Adejobi,  the state Police Public Relations Officer, in a statement on Monday said that Nwanga reported that two men dressed in military uniform attacked and snatched his Infinix Smart 5 phone, adding that policemen from the Ogudu Division, who responded to the distress call, arrested Nwanga.

Adejobi said, “When they raised the alarm, the policemen attached to the Ogudu Division on duty around the scene came to their rescue and arrested the suspect in Army uniform, while the other, also in the Nigerian Army uniform, escaped with the motorcyclist. The snatched phone was immediately recovered from the suspect.

“In the course of the police investigation, Johnson Godday confessed that he was attached to the NA 149 Battalion, Ojo, Lagos before he was dismissed from the Nigerian Army,” he added.