EX-KNIGHT ARRESTED FOR DEFRAUDING ANGLICAN BISHOP, OTHERS 15 MILLION IN ANAMBRA 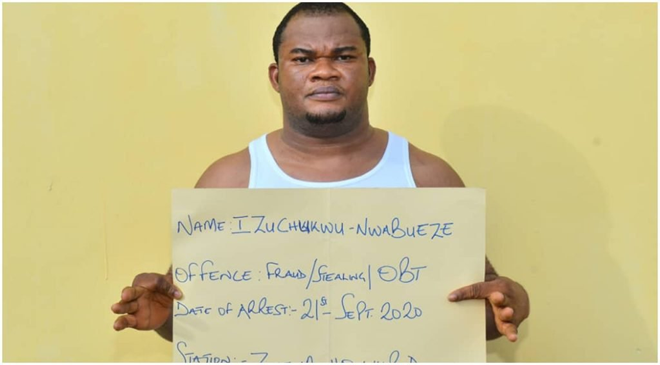 The Anambra State Zone 13 Police Headquarters in Ukpo has arrested a 35-year-old man identified as  Izuchukwu Nwabueze for allegedly defrauding an Anglican bishop and 10 others.

Newsnaija gathered that Nwabueze, who recently renounced his Anglican knighthood, allegedly defrauded his victims to the tune of N15m on the pretext of using the funds to furnish the residence of the Assistant Inspector-General of Police, Danmallam Mohammed, who was newly posted to the area.

Others allegedly defrauded by Nwabueze, who is a relation of an oil mogul in the state, included a hotelier and other prominent Anambra people.

Nkeiruka Nwode,  the Zonal Police Public Relations Officer,  in a  statement said the suspect would soon be arraigned.

Nwode,   said the AIG had instructed the victims to report at the zonal headquarters at Ukpo and cautioned members of the public to be wary of the new fraud trends.

The PPRO  said, “The suspect has been posing as an aide to the Assistant Inspector-General of Police, the impersonation that gave him the opportunity to defraud unsuspecting traders and rich people in Anambra State of their hard-earned money.

“The suspect, who acted to be raising funds for the furnishing of an unknown residential quarter and for the installation of a soundproof generator for the AIG Zone 13, Ukpo, cornered the victims to carry out the crime.

“The suspect, Chief Izuchukwu Nwabueze, also obtained money under false pretenses from many other prominent persons in the state.

It was learned among the victims he defrauded a tune of N1m is identified as  Ifeanyi Umeh Lovelyn on behalf of an Anglican bishop, among others.”

The PPRO  said the suspect was also issuing dud cheques to some of his victims, adding that he had been charged.