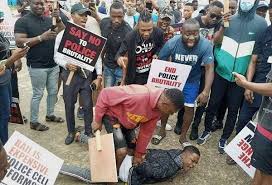 EndSARS protesters in the Lekki area of Lagos State, on Saturday, arrested and handed over a co-protester,  identified as Yusuf Lawal,  aged 25, to the police for allegedly stealing a phone belonging to another protester.

Newsnaij gathered that after Lawal stole the phone, he handed it over to his accomplice who left the protest ground with it.

Muyiwa Adejobi, The state Police Public Relations Officer, stated that the protesters handed Lawal to the police, adding that efforts were on to arrest his fleeing partner.

Adejobi said, “The #EndSARS protesters at Lekki, arrested and handed over a co-protester, Yusuf Lawal, 25, from the Ojuelegba area of Lagos, for stealing a phone, on Saturday, October 17, 2020.

“The protesters who were angry about the incident descended on him and gave him beating before they agreed to hand him over to the police at the Maroko Police Station.

“Though the stolen phone has not been recovered as the suspect passed on the phone to his fleeing gang members. The Police are working on the useful information gathered from him to track down his gang members who are at large.

Hakeem Odumosu, the state Commissioner of Police, has reiterated that this incident is a clear indication that the protests, across the state, have been hijacked by some hoodlums who hide under the #EndSARS protests to steal, loot, and cause damage to people’s property.

Odumosu, therefore, advised protesters to be watchful of those who have mixed up in their gatherings to cause pains to innocent Lagosians.”