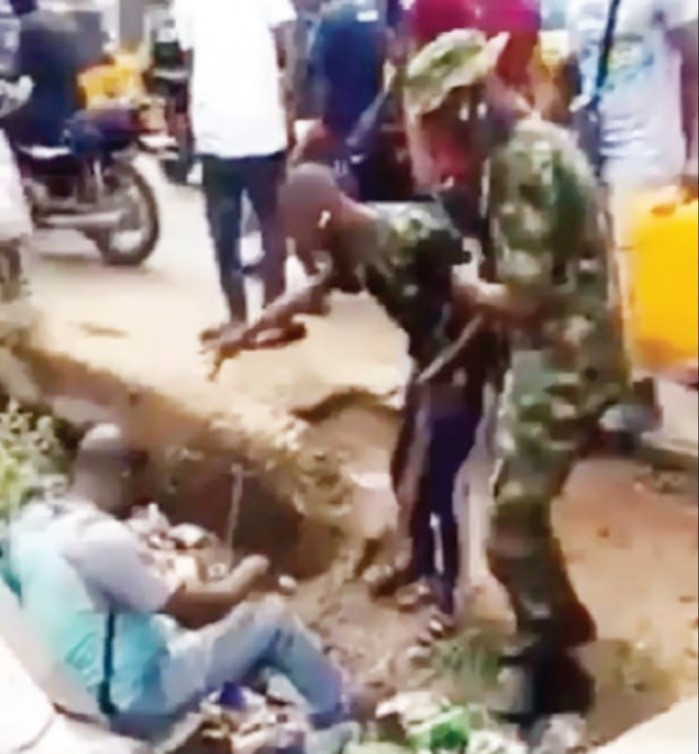 A bus driver identified as Collins Osagie,  aged 34 in an attempt to settle a disagreement between a spare parts trader and a naval rating in the Okokomaiko area of Lagos State, has lost his life in the process.

Osagie, was bruised to death for offering to pay the rating N250, the main cause of his disagreement with the trader.

A video of the torture, captured by a resident and posted on Instagram, revealed the how the two uniform men punched and kicked the victim into a gutter,

Osagie, was later rushed to a private medical facility but was later confirmed dead.

On the deceased body,  visible torture marks on different parts of the body were seen and his head also appeared to have been fractured.

Petty Officer Awosanya Olufemi with service number X8921 attached to the CND Apapa Naval Base  was identified of been behind the rating attack.

Kingsley, a friend and an eyewitness to the deceased, Kingsley, said Osagie was subjected to different rounds of torture around Church bus stop, Iyana Isasi, Okokomaiko.

Kingsley said, “The incident happened around 6pm on Sunday when Collins Osagie and myself went to the area to eat and relax.

He said “The military man, who had bought a plug from a spare parts trader in the place, came back to return it, saying his mechanic rejected it and he no longer needed the item.

Kingsley stated that “The trader refused and said he could not refund the money. This led to an argument between them. Collins stood up from where he was and tried to mediate, but they refused to listen to him.

“The argument degenerated to a bring peace between the navy man and the trader, and the latter head-butted him in the jaw. The rating sustained injuries.

“He took a bus and left. When the trader sensed trouble, he locked his shop and disappeared with his salesgirl.

“A few minutes later, the navy man returned with two other officers to look for the trader.

“Collins approached the navy man and begged him to let the matter die. He also offered him the N250 for the plug.

“One of the officers felt he insulted them and slapped Collins three times. They started beating him up. We all begged them to leave him.”

Kingsley explained that about 20 minutes later, five other military men came into the scene and the rating who had earlier slapped the victim reported to the others what he did.

The five new officers were said to have started another round of torture.

The witness said the men kicked the victim and asked him to do frog jump.

Kingsley said around 8pm, he left the area, while Osagie stayed behind.

Newsnaija gathered  that some of the naval ratings had, however, gone to lay in ambush for the victim, with the hope of also catching the spare parts trader.

Kingsley said he woke early the following day to resume his work when a colleague told him that Osagie was dead.

“I was told that his corpse was found on the road. I mobilised fellow bus drivers to look for him. While we were looking for him, a trailer driver who parked by the roadside asked who were looking for and we told him.

He said he saw some military men beating him late in the night. He directed us to see some mallams who used a wheelbarrow to take him to a hospital. The mallams confirmed and said they took him to a private hospital.

Kingsey said “We got to the hospital and met his corpse. A doctor said he died around 2am,”.

The case was immediately reported at the Okokomaiko Police Station.

A relative of the deceased, Sunday Ajose, said Kingsley and other drivers were passing around the naval base at Okokomaiko when the rating, Olufemi, sighted them.

Ajose explained that the official, who was not aware of the development, wondered if the group had come for a reprisal and started to chase them.

“He crossed the road to pursue them and was quickly grabbed, thrown into a bus and taken to the police station. The case was then transferred to the State Criminal Investigation and Intelligence Department, Yaba.

“At the SCIID, where he was queried, he said he did not ask his colleagues to beat Collins, whereas he was there the whole time he was tortured. He refused to disclose the details of the other ratings, saying he only knew one Kelechi,”.

Ajose, who lamented that the naval authorities had yet to condole with the family, said he had been spending a lot of money on the mortuary bills.

He said the family had run out of funds, as the police were also making demands to fast-track the case.