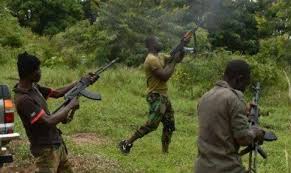 In a statement,  SP Mohammed Shehu, the Police Public Relations Officer, said the bandits propelled a violent reprisal attack on the said community following the attack of a Fulani settlement that led to the gruesome killing of three of the Fulanis by the outlawed “Yansakai” group.

“On receiving the report, the Command immediately acted and sent a Combine team of PMP/CTU led by the DPO Maradun and the Military who moved down to the village and engaged the bandits who quickly fled and escaped into the forest with possible casualties”.

“At the end of the encounter, eight Villagers were unfortunately discovered to have been killed by the bandits during the attack.

“Corpse of the deceased and those injured were taken to the hospital in Talata Mafara for autopsy and medical treatment”.

Shehu said the attack on Janbako Community was provoked by the continued operation of members of the outlawed “Yansakai” group in spite of its banning by the state government.

He upheld that the outlawed group was still being a pain to the peaceful stability of Zamfara State.

CP Abutu Yaro,  the State  Commissioner of Police, while sympathizing with the families of the deceased gave his assurance that discreet investigation would be conducted with a view to arresting those involved in the act and charge them to court for prosecution.

Yaro,  further called on members of the public to stay away from self-help, adding that he would not waste time to deal decisively with any person or group of persons whose action or actions vitiates the relative peace currently being enjoyed in the state.