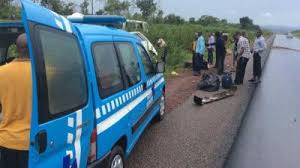 Eight persons have lost their lives while six others sustained injuries, with six other escaping unhurt when a Volkswagen Sharon commercial vehicle rammed into a bus on Wudil-Bauchi highway on Thursday.

Mr. Zubairu Mato,  the  Sector Commander of the Federal Road Safety Corps in Kano, confirmed the development in an interview with a news agency in Kano, Nigeria.

Mato said, “We received a call about 9:30 a.m. on December 3 and we quickly dispatched our personnel and vehicle to the scene of the incident to rescue the victims at about 9:50 a.m.,”.

The FRSC sector commander  explained that the accident occurred as a result of over-speeding and dangerous driving adding that victims who lost their lives were male adults, while six were injured and six others escaped unhurt,”

Mato said the victims were taken to Garko General Hospital in Kano, where the doctor on duty confirmed eight dead.