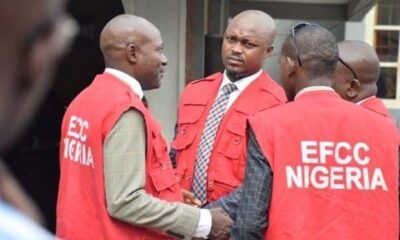 The Economic Financial Crimes Commission, Makurdi Zonal Office, said on Wednesday that it had arrested a woman known as  Patience Robert, who allegedly posed as an official of the EFCC and defrauded several people with promises of employment in the agency and the Nigeria Customs Service.

According to a statement by Wilson Uwuajare,   the Head of Publicity of the anti-graft agency, the woman was arrested following a complaint by a victim whom he allegedly collected N1.5m from under the pretext of helping him to secure jobs for his children in the EFCC.

The statement noted that the complainant equally revealed that the suspect tricked his younger brother to part with the sum of N300,000 after promising to get his children employed in the NCS.

The anti-graft agency said investigation further revealed that the suspect had several times been arrested for impersonation and fraud by the police and other agencies.

“It was discovered that she had been charged before a magistrates’ court in Minna, Niger State, for impersonation and obtaining money under false pretenses.

“She allegedly obtained over N11m from several victims with propositions of job offers in various agencies, while parading herself as a staff of the Anti-graft Agency.

the anti-graft agency further stated that the suspect also defrauded another victim in Abuja to the tune of N4.5m while posing as ‘Director of Civil Intelligence’.

Uwuajare noted that the suspect would be arraigned in court upon the conclusion of the investigation.