DECOMPOSING BODY OF A KIDNAPPED VICTIM FOUND IN DELTA 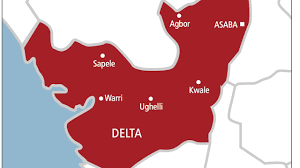 The decomposing body of a kidnapped 35-year-old, identified as Sebastian Kadiri was found about 30 meters away from his house.

NEWSNAIJA learned the deceased was kidnapped at about the same time with one Deborah Williams, who was abducted by suspected herdsmen on February 7, 2020.

While the 13-year-old Deborah gained freedom from her abductors two days after the ransom was paid, the whereabouts of Sebastian remained unknown until on Monday when his body was found.

It was gathered that the children who were returning from the farm alerted neighbors and members of the vigilante in the community to the sight of the corpse.

The Obi of Issele-Azagba, Obi Francis Ijei, described the incident as unfortunate.

Ijei,  said vigilante members had been searching for him, not knowing that he had been killed by those who took him away.

He said “I am begging the government and the Commissioner of Police Hafiz Inuwa, to, as a matter of urgency, help Issele-Azagba community. My people are being kidnapped on a daily basis. They are dying. As I speak to you, my subjects are leaving their village because of fear. We don’t know who will be the next target.”

DSP Onome Onovwakpoyeya, the state Police Public Relations Officer, who confirmed the incident on Wednesday, said the corpse had been buried.

“The corpse was seen close to his house. His brother identified his body and requested his immediate burial because of the decomposing nature of the body,” he said