DEAD INFANT FOUND IN A REFUSE DUMP IN RIVERS COMMUNITY 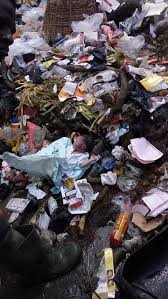 The Police Command in Rivers State has uncovered a dead infant abandoned in a refuse dump by an unknown person.

NEWSNAIJA learned that residents of Egede community, Mile 2, in the Diobu area of Port Harcourt, who had gone to dispose of their refuse when they discovered the lifeless male infant on the floor wearing only a diaper.

Police officers attached to the Mile 2 divisional headquarters, who were informed about the baby, removed the corpse.

An eyewitness, who refused to give his name, said the baby which appeared to be a day old, was discovered around 9 pm on the floor adding that some used syringes and injections were found close to the body.

He said “Alarm was raised by the first set of persons who came to dispose of their waste at the dump, attracting a large crowd to the place. This resulted in heavy traffic on Ikwerre Road, but the police later came and removed the baby,”.

Nnamdi Omoni, a  spokesman for the state police command, confirmed the incident.

The spokesman said, “Before our men got to the scene, the baby was already dead. We have intensified investigation into the incident to unravel what happened and to bring to book any person found culpable.”