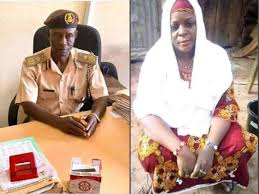 Alhaji Usman Ndagi, a  Deputy Comptroller of Immigration, has died in Abuja barely 18 hours after losing his sister in Niger State.

The deceased, who hailed from Mokwa, Niger State, died last Thursday, while his sister passed away on Wednesday.

The late officer, who was recently elevated to his new rank, has since been buried in accordance with Islamic rites.

James said  “I learnt that the DCI died after hearing about the passage of his sister. He was such a religious man and was always at the mosque praying,”.

In a Facebook post sighted Yax Mokwa, an acquaintance of the deceased, disclosed that Ndagi died shortly after complaining of dizziness, while his bags were being packed for the journey to Niger State for the sister’s funeral.

He wrote, “The death of his sister came as a shock to everyone and he was set to leave Abuja for Mokwa that morning (last Thursday). He asked for his bags to be taken to the car as he was feeling a little dizzy and would want to relax a little only for them to return to his lifeless body.