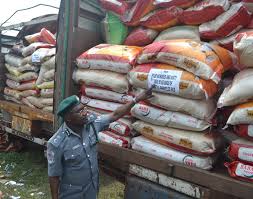 Speaking while unveiling the seizure,

According to Shuaibu, the unit generated an N1.42bn in the last four weeks from the debit notes and anti-smuggling activities.

The coordinator who warned smugglers and importers of contrabands that the unit would not allow them to turn the country into a dumping ground appealed to importers to make honest declarations always.

Shuaibu,  said, “Importers and smugglers should not make Nigeria a dumping ground because these fabrics and footwear can be produced in Nigeria.

He said “We have textile industries employing a huge number of Nigerians. If we keep on importing contrabands, then how do we want them to remain in business?”

The Coordinator added, “These are what can be produced in Nigeria. We have hides and skin factories all around the country.

“In Aba, we have young boys doing very well producing footwears, bags that the Nigerian Army patronize them. So why do we need to import or smuggle what we can produce locally?”

The Coordinator further encourages smugglers to have a change of heart for the betterment of the country and contribute their quota to ensure the restiveness of the youth was reduced.