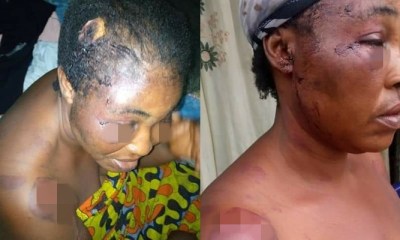 A mother of six has accused Blackson Nwanyawu,  the leader of the Etche legislative assembly in the Etche Local Government Area of Rivers State, of inflicting injuries on her.

Speaking to journalists in Port Harcourt, the woman, who gave her name as Love Nwanyawu, said the councillor, who is her husband’s younger brother, along with two others, beat her to stupor.

Love, who had a swollen face and bruises in other parts of her body, said trouble started when she travelled to her husband’s hometown in Omualu community, Etche.

She said she heard the councillor, his sister and a male relative, shouting on top of their voices.

The woman claimed that the then Blackson then accused her of witchcraft and vowed to deal with her.

Love said “I was surprised. The next thing I saw was that the three of them came at me, saying I was disturbing them and that I was a witch. They said anytime I come back, the house would not rest. Did I say how?

“They beat me up. After beating me and locking me up, one went outside, brought a chair and hit it on my head twice. When he (councillor) saw blood gushing out, he drove off. Others also left. With the blood, I shouted for help. They all said their brother is a councillor and nothing will happen.

“I am calling for people to help me to seek justice. My husband trained him from secondary school to university. He lived with me for years when my children were small. I paid his last school fees and he promised that when he graduated, he would ensure my children did not suffer.

Love said, “I was asking him, is this the promise you gave me? Look at how he made me. He wanted to send me to an early grave,”.

The victim claimed that her husband had been ill and was devastated by the incident.

Meanwhile, the councillor, in a telephone interview with the in-law’s daughter aired on a radio station (Nigeria Info 92.3 FM, Port Harcourt) and monitored by our source, claimed that his brother’s wife insulted him.

He said, “Your mum keeps insulting me every day when I have not had any issue with her. Your father called me; I say I am not regretting my action. I have tolerated more (than) I can bear,”.

Blackson, however, told our source on Thursday that he did not touch the victim and promised to honour the police invitation on the matter.

Blackson said “There is no point talking too much because these things happen when you are in public office. But I will be to clear myself,” he added.

A spokesman for the state police command, Nnamdi Omoni, confirmed receipt of the complaint, saying the matter was being investigated.

Omoni said, “The report got to us yesterday and we have initiated the action. A team has been put in place to get the suspect to come and answer to the allegations against him. I am the officer in charge of the human rights desk, so, I am investigating the matter.”