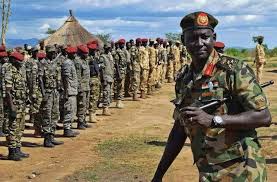 The Central South Sudanese army spokesman has announced today that  127 dead has been recorded in Tonj town following a clash between soldiers and civilians during a disarmament exercise.

Lul Ruai Koang, the Major General told AFP that the fight occurred over the weekend as security forces carried out an operation disarm civilians in the area which has seen deadly inter-communal clashes.

Newsnaija learned that More than six years after a civil war broke out in the country, and in the absence of a functioning government, many communities are armed with weapons which they keep for protection or defense against cattle raids.

It was also gathered that the violence in Tonj community began after several armed youths got into a disagreement with soldiers in which an initial armed confrontation was brought under control, but according to the Major General the youths mobilized others for an attack on the army position.

The spokesman Major General Lul Ruai Koang, further stated that “On the latest, the number of those killed, I can confirm to you is 127,” adding that 45 of those killed were security forces and 82 were youths from the area.