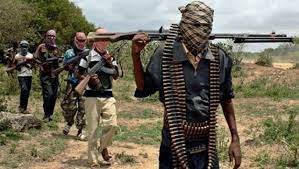 NEWS reaching us says Bandits, on Monday, killed two soldiers and abducted a Chinese in the Magama Local Government Area of Niger State.

NEWS NAIJA learned that the bandits attacked the Libale community in Nasko, but met with stiff military resistance.

This resulted in the exchange of fire between the bandits and the soldiers.

A security source told a source that two soldiers were killed in the attack, while several bandits were killed.

However, the number of bandits injured or killed in the exchange of fire could not be known.

A resident of the village said the bandits ran into the Libale Mountain area in the community.

News Naija further learned that the military and other security agents were currently combing the mountain area and the forest with a view to apprehending the bandits.

The Chinese were said to be one of the workers of the construction firm handling a road project in the area.

When contacted, DSP Wasiu Abiodun,   the Police Public Relations Officer in the state did not take his calls and had not responded to text messages sent to his mobile telephone.