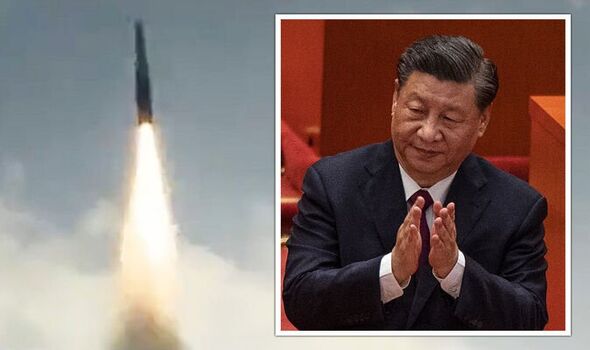 China has publicly demonstrated for the first time the launch of its deadly hypersonic anti-ship missile,

Experts believe the missile is aiming towards aircraft carriers as a message to the US Navy.

is capable of speeds in excess of 3,806mph and has a strike range of approximately 620 miles.

The military display comes ahead of the Chinese navy’s 73rd anniversary, which takes place this weekend.

in the People’s Liberation Army’s (PLA) fleet, in a video clip of the apparent launch.

is design for many missions and is equip with a variety of sensor and weapon gear.

The latter is thought to include air-defence, anti-missile, anti-ship, anti-submarine, and land-attack weapons,

with the vessel housing 112 vertical-launch missile cells, 64 in the forward section and 48 in the aft section.

The behemoth, which is the result of 50 years of military development,

is also thought to have been designed with various stealth features.

These include a radar cross-section reduction layout

as well as a smoke stack designed to reduce the vessel’s infrared signature.

The exhibition was suppose to deter foreign vessels, particularly those from the United States.

from intervening in the event that the People’s Republic of China attacked Taiwan.

is capable of hitting any vessel in an aircraft carrier strike group,” he added.

“The combination of the Type-55 and YJ-21 missiles

was design to fight America’s hegemony in the region’s maritime domain.”